Bristol City Council has announced that after a major review of Bristol’s 20mph speed limit it was determined that no significant changes need to be made to the measures introduced throughout the city between 2012 and 2015.

Why Review the 20mph scheme?

To fulfil a mayoral manifesto commitment by Mayor Marvin Rees, to review the current speed limits on residential and busy shopping roads and assess if any changes are required in order to improve its effectiveness.

This Council consultation received one of the highest ever level of responses from the public with nearly 3500 responses received both via the online consultation page and through paper versions available in the local community.

Why has the 20mph Review taken so long?

This Bristol City Council consultation received one of the highest ever level of responses from the public with nearly 3500 responses received both via the online consultation page and through paper versions available in the local community. This was a vital process of gathering local information for each unique location, as well as, collating 357 further suggestions made via the consultation. Processing and analysing this information and data takes substantial time.

Why has the decision been taken to make no changes to the speed limits in Bristol after the review?

The review process considered each of the roads identified for review on a case-by-case basis including a wide range of views contributed by respondents; all of which matter and all are taken into account.

The majority of respondents to the 20mph Review (publically consulted on in summer 2018) were in favour of the current speed limit. Each road also considered by its speed data, and also by changes in local circumstances.

Recommendations of appropriate extra measures have been made to extra lines and signs.

Did you review all of the roads in Bristol?

No, the aim of the 20mph review is to identify whether any localised adjustments are needed in order to improve its effectiveness of the 20mph speed limit across the City. The 90 roads included in for Review were roads identified from information gathered through local Councillors, the public and stakeholders, and through the UWE Monitoring Report (BRITE).

Find out what people think about 20mph

How was the 20mph review evaluated?

Respondents were also asked about their support for 20mph speed limits. Headline results from those who responded to the following questions in the summer’s 20mph Review revealing:

90 specific roads were identified for review from information gathered through Councillors, the public and stakeholders and through the UWE Monitoring Report (BRITE), since the introduction of the scheme in 2012.  Respondents could state their preference of speed for each road and give their reasons; there was also space to comment on ‘any other road’ so not limiting people to the ones chosen.

For each of the 90 roads identified for review, evidence was considered for each unique case, in terms of:

On roads where the speed data was higher than 24mph for both ATC and/or Strategis on 20mph roads or lower than 24mph on 30mph these were flagged.

Within the consultation there was also the opportunity to name ‘other roads’ and make comments accordingly stating whether they wanted to retain the current speed limit and provide a reason. In total a further 357 roads were identified (mostly by one person each, although some were repeated by others) and have been categorised into the following actions based on comments received:

Those that were identified to ‘Investigate Speeds’ needed no change after speed data analysis was performed.

How did you decide on actions to take as a result of the 20mph Review?

Out of the 90 roads that were reviewed only 17 roads were flagged as requiring further consideration based on the consultation response, speed data and road layout changes. Of these only 5 had speed data where changes to the speed limit could be considered and these roads were considered in the briefing.

Of the 5 where speed data presented a possible change the following summarises the decisions agreed, taking into consideration the majority support in each case for no change:

What actions have been taken for the other roads that were put forward by respondents to the consultation?

Of the ‘other roads’ that have been categorised as ‘investigate speeds’ this recommendation involves further analysis to provide actual speed information to see if there is an issue or whether it is perception. Therefore of these 357 roads, 42 roads will require further investigation and 187 require no further action and 128 are out of scope of the project.

In your recommendations for action, what do you mean by additional measures?

The ‘additional measures’ recommended in the 20mph Review refer to extra signage that will help raise awareness of the 20mph speed limits and increase driver compliance to them. Roads put forward for additional measures will be reviewed to make sure signage is positioned as effectively as possible (subject to suitable locations with existing infrastructure). 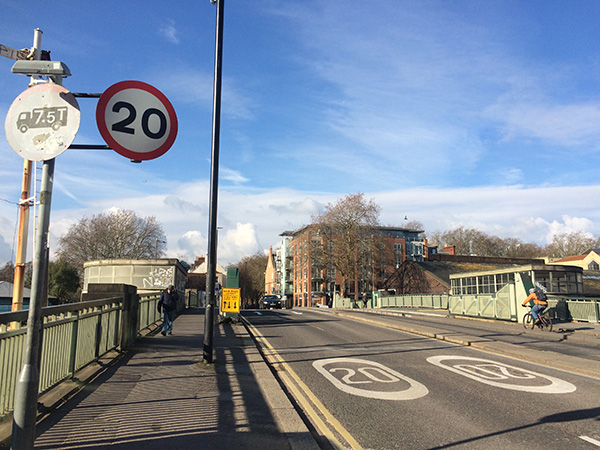 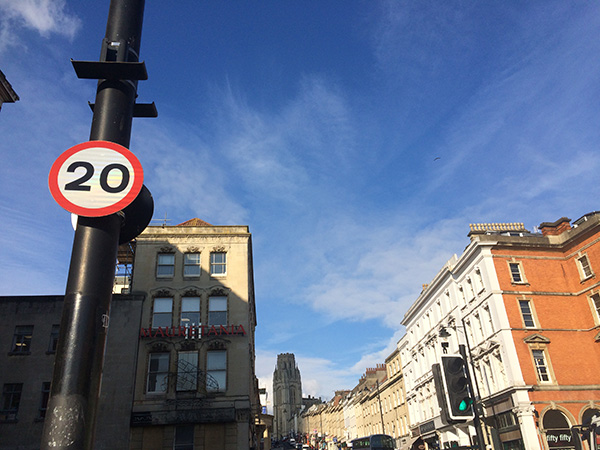 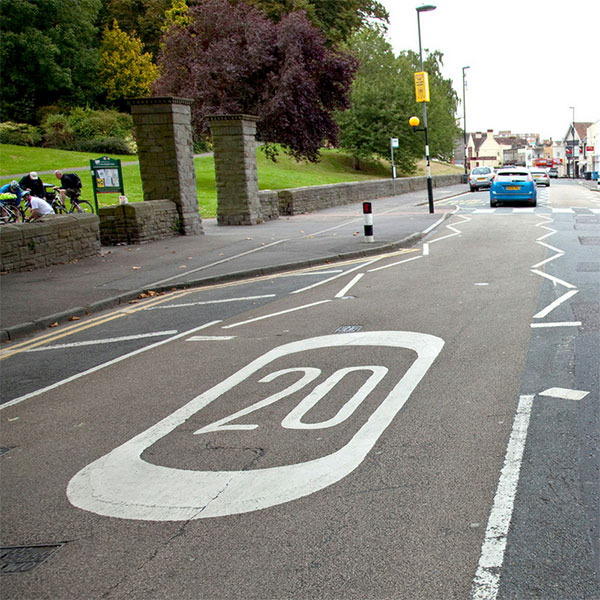 In some locations, a Vehicle Activated signs (VAS) may be recommended. These are electronic signs which only become triggered (visible) when approaching motor vehicles are exceeding a certain speed.

Other additional measure include Community-led activities such as forming a Community SpeedWatch, where a group of local residents monitor speeds at a given location, motorists exceeding the speed limit will be contacted by the Police who take an educational approach to raise awareness of the impact of their anti-social driving behaviour on the community.

Drivers in Bristol are also encouraged to become a pace car and display a free ‘20mph A Little Bit Slower. A Whole Lot Better’ car sticker.

Find it hard to stay at 20mph?  Read these top ten tips to stay within the speed limit 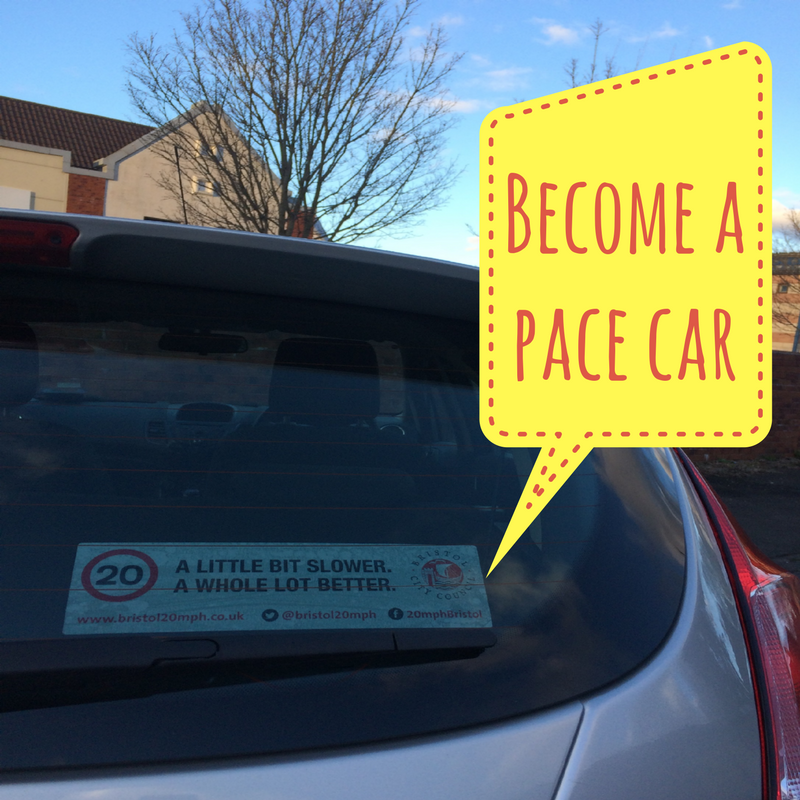 How was the implementation of 20mph project evaluated?

The 20mph speed limit implementation was completed in September 2015 and included a monitoring programme. In February 2018 the Bristol Twenty Miles Per Hour Limit Evaluation (BRITE) study was published by the University of the West of England (UWE).  This independent peer reviewed report assessed the impact of 20mph speed limits and found a reduction in road speeds and fatalities following road collisions since the lower speeds were introduced. Analysis including using individual speed data from over 36 million vehicle observations, found 94% of surveyed roads have slower speeds, active travel levels have increased and there was a significant reduction in the number of fatal, serious and slight injuries and potentially significant financial savings for the NHS.

This research report took a holistic, public health approach to evaluation, using a variety of data sources to examine: changes in vehicle speeds; road traffic casualties; levels of walking and cycling; public perceptions and attitudes; and reported levels of health and wellbeing across the communities in Bristol before and after the introduction of 20mph speed limits across Bristol.

The most recent national study (Atkins, Nov, 2018) commissioned by the Department of Transport confirms public support and acceptance of 20mph limits, but says “The comparator analysis indicates that there is insufficient evidence to conclude that there has been a significant change in collisions and casualties following the introduction of 20mph limits in residential areas, in the short-term”.

This study only looked at 12 case studies, which did not include monitoring data from the Bristol 20mph scheme.

While the annual British Social Attitude Surveys: Public attitudes towards transport have consistently reported that the majority of the population support 20mph speed limits at a level of between 69-73%; in Bristol YouGov Tracker surveys in 2013, 2015 & 2017 showed a clear majority of public support for 20mph speed limits with the latest data revealing 62% on residential roads, 72% on busy streets.

Read more on 20mph: a survey of GB attitudes and behaviours

What are the results of the 20mph implementation? – UWE study

UWE’s Bristol Twenty Miles Per Hour Limit Evaluation (BRITE) study found that, on average, speeds on more than 100 surveyed roads have reduced since the 20mph speed limits were implemented, with average speeds of between 19mph and 26mph on 20mph roads shown in the report.

On 30mph streets, average speeds on the roads surveyed were below 30mph in every area.

The lower speeds were also found during night and summer times, when there is typically less traffic to slow motorists.